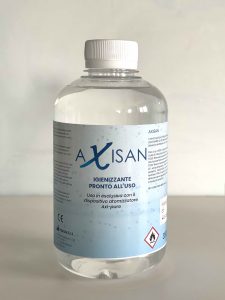 AxiSan, the ready-to-use surface sanitizer, is specifically formulated for an exclusive use with the Axi-pure atomizer device.

A 100% Hydrosoluble product, with neutral pH.

Broad-spectrum action.
No residues. Does not require drying or rinsing.
Instant action.
The intact and correctly stored concentrated product is valid for 5 years, stability is confirmed by validation tests in chimical physics through quantitative determinations of the active principles.

A specific biotechnology for the denaturation of biological fluid parts containing human metabolism with high degrees of infectivity, in order to comply with the current safety legislation on biological risk. Specifically made for an internal use of the ABT Line, controlled fluid dynamics biomedicals.

The Alcalase enzyme interferes with the replication cycle of viruses by blocking the activity of the Proteolytic enzyme.

Their action is carried out by inhibiting viral proteases, enzymes involved in the production of proteins.

Viral particles are either not produced or, if any, are so defective that they cannot cause infection.

It is commonly used as a household disinfectant. Ethanol kills microorganisms by denaturing their proteins and dissolving their lipids; it is therefore effective against many bacteria, fungi and viruses (including the SARS virus).

Axivirium is a disinfectant – concentrated detergent. The activity is ensured by its mixture’s synergy between the different components and is verified according to CEN / TC / 216 standards for bactericidal, virucidal and fungicidal activities.

The product must be dispensed exclusively on the surfaces which are meant to be treated, taking care of covering the entire surface evenly.
The product should not be dispensed into air or towards faces, heat sources, open flames, etc.

Once the product has been used, the treated surface will dry in a few seconds, without any need for further actions.

SPECIFICATIONS: 380 ml refill bottle, pack of 6 bottles to be screwed onto the Axi-pure device

WARNINGS: Keep out of the reach of children. Store at room temperature away from heat sources. The expiry date refers to the product in intact packaging and correctly stored.

Documentation is available upon request